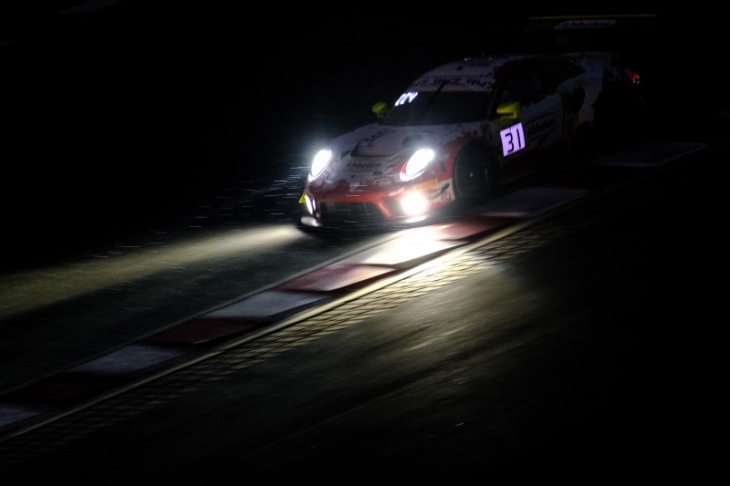 THe #31 Frikadelli Racing Porsche of Dennis Olsen, Nick Tandy and Mathieu Jaminet has won the Kyalami 9 Hour, the IGTC season finale. This victory means that Olsen has been crowned IGTC Drivers’ Champion and Porsche has taken the Manufacturers’ crown.

“Finally, this has been the longest nine hours of my life!” Olsen, who won two IGTC races this year, said after the race. “Thank you to everyone here, everyone has done the best job Porsche, thank you to Porsche, Frikadelli, this is for everybody.

“We are excited and happy! It’s been a crazy year, winning this and Bathurst, incredible.”

Frikadelli’s win came after Tandy stormed to the lead from third in treacherous conditions after a late restart, following a lengthy biblical rain shower which began just before the start of Hour 8 and lasted until the final half hour.

When the race went green it was a dash to the flag for the front runners; the top 10 on the lead lap. After rounds of stops under Saftey Car conditions which meant the running order shuffled continuously, the #10 SPS Automotive Performance Mercedes found itself in the lead, ahead of the #20 GPX Porsche which led the race before the rain arrived.

But neither of the top two would take the win. Yelmer Buurman in the #10 Mercedes lost the lead to Richard Lietz in the #20, before he too dropped to second.

Porsche allowed Nick Tandy in the recovering #31 Porsche to the front, the Briton tasked with delivering Olsen the title in the final stint. (The #20’s line-up of Michael Christensen, Kevin Estre and Lietz featured no contenders.)

“I’m pleased we went back racing,” Tandy said, after he drove from third to first in the final hour. “It was another one of those days, ups and downs all day. We were so lucky we had this great crew, car the fastest car in the dry, and the wet.”

Unfortunately, Lietz was unable to hold onto second and make it a 1-2 finish for Porsche and finished third. A determined Nicky Catsburg driving the #34 Walkenhorst BMW, which started the race outside the top 10 but became a contender from the halfway mark onwards, charged to second from fourth at the restart.

Catsburg tried to reel in Tandy as best he could to score a big win for BMW in the final race of the season, but the Dutchman was unable to make a challenge for the lead in the final moments. He crossed the line second, 6.7 seconds behind the #31.

“Honestly we had a perfect car throughout the race, my teammates had unbelievable pace in the dry. I thought we would go backwards in the wet, but we had pace. I’m very happy with P2, it’s a great way to end the season,” said Catsburg after what was an impressive race for himself, Mikkel Jensen and Christian Krognes.

Despite finishing second the team will leave pleased with the result, after its drivers had to overcome an unscheduled stop during the race, when the car’s drinks system and air-con failed.

“It was extremely hot in the car during my stint,” Krognes explained. “My helmet was falling apart, the glue was running! I had to stop.”

Buurman, after dropping like a stone at the restart, was able to salvage a fifth place finish for the #20 SPS crew. Christopher Haase in the #29 Land Audi found a way through before the end. That secured a strong fourth place finish for the best placed Audi team, which at times featured in the battle for podium spots but through the various safety car periods and FCYs faded.

The #18 KCMG Nissan, another dark horse during this one, finished sixth, ahead of the #12 Dinamic Motorsports Porsche which early on looked to be a contender for the win but wasn’t able to win the Drivers’ title for Matt Campbell.

For Frikadelli, this was an impressive victory, and came after a long recovery drive. In the first half of the race; the team had to serve a drive-through after Tandy collided with Christensen’s GPX Porsche in traffic while the duo ran 1-2.

That dropped the #31 to 12th overall. But a strong run for all three drivers in the second half of the race, with the aid of safety cars, kept them in it, and at the end, when it mattered most, Tandy delivered and scored Frikadelli Racing’s its most significant victory.

“We had to go all in, Nick was the perfect guy to finish the race!” Added Jaminet.

What about the other title contenders? Well Maxi Buhk (the leader heading into the weekend) had his title chances ended at the very start of this one, the #999 GruppeM Mercedes suffering a mechanical failure that would force it into retirement.

That left Maxi Gotz as the only Mercedes driver in with a chance. The #10 SPS Mercedes came close, in a race in which the saw the Drivers’ and Manufacturers’ title race swing like a pendulum throughout. But in the end it was Porsche and Olsen’s day.

Lechner Racing the best of the other class winners

Unfortunately this race didn’t feature any head-turning battles in the other classes, mainly, because the other categories didn’t have the numbers.

The highest place non-Pro entry was the #9 Lechner Racing Porsche in 13th, which won the Silver class after a lead change late in the race. The #6 Black Falcon Mercedes was on course to win the class in the final hour, but under the safety car Sergei Afanasiev ground to a halt and lost the lead before getting going again.

In Am, Walkenhorst’s #36 BMW took the win by a minute over the #40 SPS AMG GT3. Pro-Am saw Strakka’s entry win almost by default after its only contender, the Garage 59 Aston Martin, had a clutch failure in the opening hour which prompted an extended period in the garage before it eventually retired.

And in the National class, the Pablo Clark Ferrari was the only finisher, after the only other entry, the Stradale Lamborghini, crashed out early on.

Overall though, this was a very entertaining race. Before the rain cost us much of the final few hours, there were plenty of on-track battles and strategy calls that kept everyone guessing. This race could have easily been red flagged if the rain continued, but thankfully it let up and we had a frantic dash to the flag to look back on.

Kyalami as a circuit provided a fitting finale to the IGTC season.

Scott Dixon to race with Aston Martin at Bathurst 12 Hour