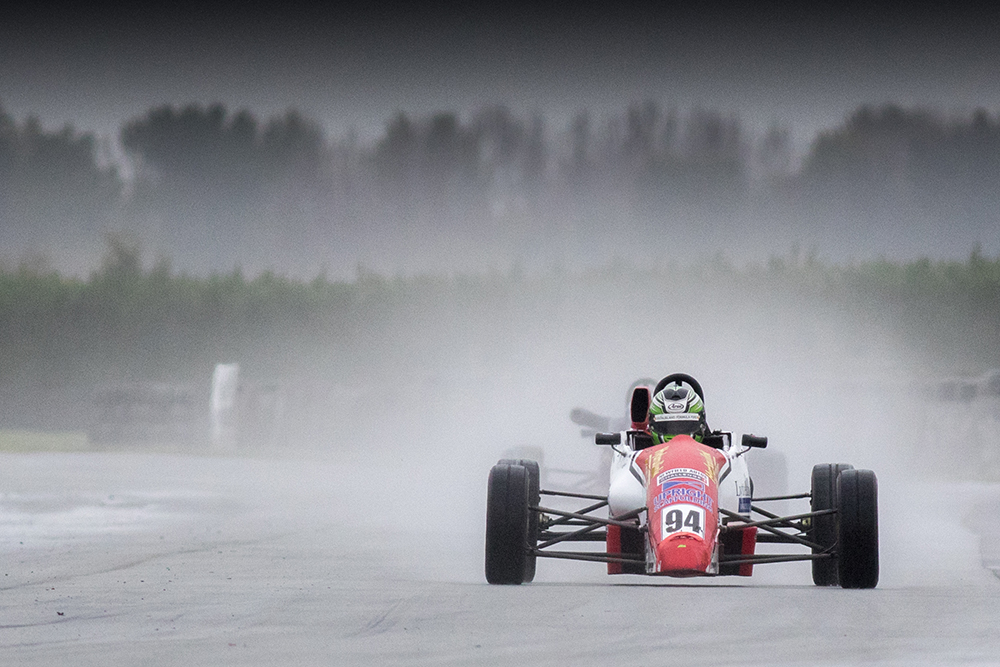 Christchurch’s Michael Collins has won the 2016/17 South Island Formula 1600 Championship after a successful final round at Timaru International Raceway on Saturday.  While Southlander Jordan Michels placed considerable pressure on Collins, the Cantabrian came away with two wins and a second, enough to seal the title.  He now equals the record of three titles previously won by fellow Cantabrian Andy McElrea.

“It’s pretty good to get the third one and match the record,” commented Collins (Van Diemen RF91).  “It was pretty wet, particularly in qualifying.  The plan was not to push too hard and just to keep it on the track.  There was no point in crashing it!  We’ve been pretty consistent over the season with only one dnf (did-not-finish).   It is a matter of getting results”

Michels (Mygale SJ13) got the better of Collins in qualifying with last season’s champion Ethan Anderson second fastest.  Damp conditions then continued into the first of three races.  Unfortunately, for Anderson this ended abruptly with a crash into a tyre wall.

“I got a wheel on the grass and couldn’t steer so went into the tyre wall,” said Anderson.  “It was difficult conditions and I ended up a passenger.”

This resulted in Anderson having to head to Timaru hospital for a quick check-up before he was able to take part in anymore racing.

“I ended up with a broken knuckle,” said Anderson (Van Diemen RF93 Stealth).  “The car was able to be repaired while we were getting checked-out.  However, we missed the second race after arriving back at the track just two minutes too late.”

While Michels drove away in the first race, Collins was happy to sit in second and ‘bag’ the points.

“The second race was still pretty damp,” said Collins.  “But there was a dry line.  I managed to get a jump on Jordan at the start.  While he initially fought it out with some of the others I was able to create a gap and had a clean race until the end.”

The track continued to dry in time for the final race that saw Collins take another victory.

“Jordan was chasing me all the way in this one and certainly applied the pressure,” said Collins.  “However I got a better start off the line from P2 and was able to control the race from there.”

“It was always a long shot but we did everything we needed to do,” commented Michels.  “We qualified on pole by 1.8 seconds and won the first race.  Two second placings was enough to give us second overall in the championship and 1st in our class so pretty happy with that.”

Collins won the round from Michels with Robert Toshach (Spectrum 08) third.  With three Classes competing across the series Micehsl won Class 1, Collins Class 2 and Roger McKenzie won the historic Class 3.

As part of the prize package Collins will head to Australia and test an Australian Duratec Formula Ford with Greg Woodrow and the Mygale Race Academy programme with Evolution Motorsport providing support with airline tickets.