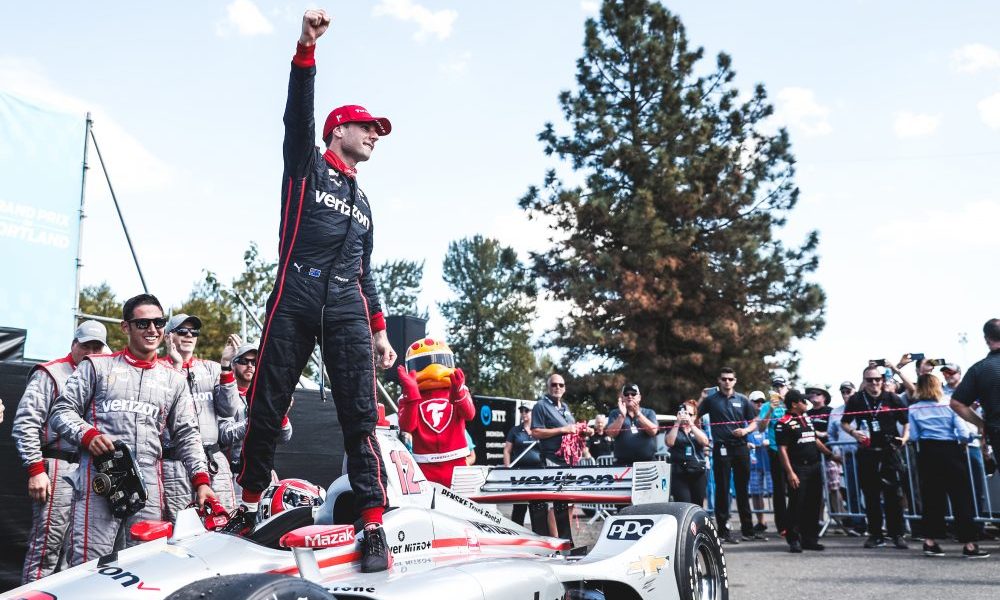 Will Power kept it clean on a chaotic day to claim the 37th IndyCar victory of his career in Portland on Sunday.

Power took the lead on lap 52 when Scott Dixon was forced into the pits with a battery problem, and remained in command once the final stops shook out. As the race entered its final stages he had a buffer of more than 3.0s over the pursuing Felix Rosenqvist with third-placed Alexander Rossi mired 11s further back.

Just as Power was starting to feel comfortable, Santino Ferrucci’s Dale Coyne Racing Honda cut out in the final corner and stopped on the main straight, triggering a full-course caution. But any thoughts that Rosenqvist or Rossi might have had about capitalizing on the restart were squashed when Power shot away at the green. Over the final four laps, he almost completely restored the gap he’d had over Rosenqvist when the yellows flew.

“It was a pretty tough race,” Power said. “I had constant pressure from Rosenqvist at the end, we could pull away and I thought ‘oh this is going to be good’, and then the yellow flew and I thought, ‘oh come on, man’. Stoked to get in victory lane. Awesome, man. I’m exhausted. Mentally exhausted.”

Rossi held on for a third after a frustrating afternoon in which he again failed to make inroads into Josef Newgarden’s championship lead. He survived an early scrap with team-mate Ryan Hunter-Reay when he bobbed out from behind Hunter-Reay’s rear wing on the main straight and immediately found himself on the receiving end of some startlingly robust defending in response. The two Andrettis managed to avoid a friendly fire incident, but Hunter-Reay then speared straight into the unfortunate Jack Harvey at Turn 1, putting the Meyer Shank car out on the spot, and forcing his own car to be taken behind the wall for repairs that ultimately left him 13 laps down.

Having survived that and moved into third, Rossi held station throughout the first stint, but stayed out a couple of laps longer than his tires would have liked. He lost a significant amount of time as a result, and rejoined almost 12s adrift of the leaders and under pressure from Colton Herta.

Herta’s team had made a similar error. After starting from pole and leading through the opening stint, he stayed out too long before making his first stop for new tires and had fallen to fifth by the time the Harding Steinbrenner pitwall finally called him in.

Newgarden finished fifth and was lucky to finish at all after finding himself in the middle of a Turn 1 melee that began when Graham Rahal misjudged his run into the first corner and tagged Zach Veach into a spin. That triggered a chain reaction that ultimately involved half a dozen cars, four of which – those of Rahal, Veach and the two Arrow SPM cars of James Hinchcliffe and Conor Daly – retired on the spot. Takuma Sato took damage that forced him into the pits for repairs, while behind them, Simon Pagenaud was hit from behind and turned around.

“Second year in a row, third race in a row I’ve been taken out in the first corner,” Hinchcliffe said. “It’s time and time again. Graham’s all the way… his right side tires were over the white line. You’re not going to make the corner from there. To have both cars taken out in Turn 1 because someone wasn’t using their head is frustrating.”

“I just messed up,” he said. I misjudged it bad, and will take it on the chin. I lost my depth there a bit in the pack, but I misjudged it, not just a little, but a lot. I’m sorry for the guys I affected. I screwed up. I don’t know what else to say.”

One of the few drivers in the vicinity of the mess who wasn’t affected was Newgarden, who managed to sidestep all of the spinning cars and tiptoe through the shortcut unscathed. His subsequent progress owed more to attrition than overtaking, but he still left Portland with his points lead padded out to 41 ahead of the finale.

“I was in the wrong place, [the Turn 1 accident] happened right in front of me and I had nowhere to go, so I tried to stop and go around,” he said. “Fortunately we didn’t hit anything and we got going again and made the most of our day. Wish we could have been higher up, but we started 13th, can’t be too unhappy with where we ended up. Happy for Will – if we weren’t going to win, I wanted him to win and take the points off everybody else. Wanted the win, was fighting for the win, but fifth was about the most we could hope for, and we made it happen.”

Meanwhile, the day very likely spelled the end of Scott Dixon’s title hopes. Dixon had taken the lead when Herta fell off the pace and had a gap of more than 3.0s over Power when his car suddenly shut down in Turn 10. He managed to make it halfway down pit lane before the car car out completely, and the Ganassi crew pulled it down to the pit  stall where they put in a new battery and sent him back out, albeit three laps down.

“Shame to give away a win like that,” said a visibly disappointed Dixon. “Especially with the situation we’re in with the championship. It’s almost impossible now. It’s frustrating when you go out of races like that.”

There was a better outcome for fellow championship contender Pagenaud, who rebounded from his opening lap drama to finish seventh.

“Dixon’s won the championship from 45 [points down] so we’re in it,” he said. “Pretty awesome to go to Laguna with a chance at the championship. I’m determined. We had a really good race today, despite all the problems at the start.”

That last quote could equally apply to Spencer Pigot, who came out of the Turn 1 mess facing backwards and with a car that didn’t want to turn right, but still managed to finish ahead of Pagenaud in an excellent sixth.

Elsewhere, the afternoon promised much for Marco Andretti, who earned an early spot in the top 10 as a result of the Turn 1 carnage, and had the speed to remain there as the race continued to unfold. Things went south when he was battling Pagenaud, who gave him a squeeze that forced him onto the kerb and resulted in a broken front wing.