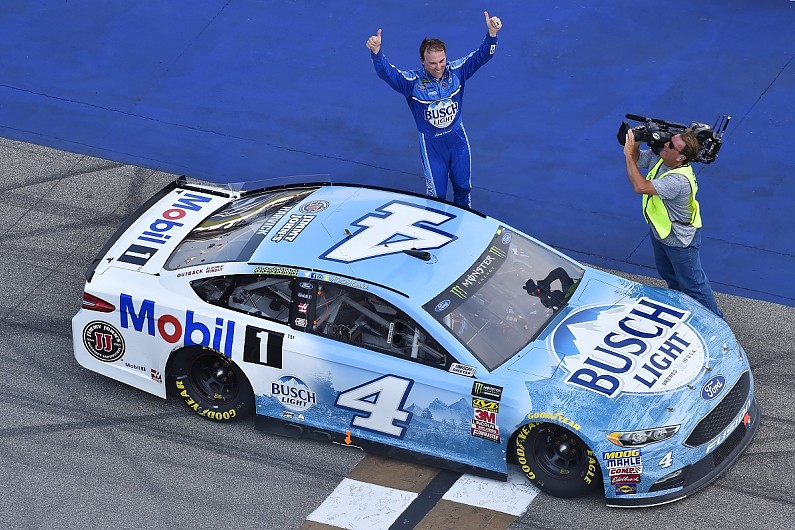 Kevin Harvick claimed his seventh NASCAR Cup series victory of the season with a dominant performance at Michigan.

The Stewart-Haas Racing driver was at the front of the pack when the race restarted after a late safety car, brought out after Ty Dillon ran over a piece of debris that severely damaged the front of his Chevrolet.

Dillon’s brother Austin was Harvick’s closest rival in the final quarter of the race, and a quick stop for two tyres in his final stop of the race briefly handed the Richard Childress Racing driver a net lead.

But Harvick, who had pitted a few laps earlier, quickly passed Dillon and had built an advantage by the time the pit-cycle put him back at the front of the field.

Dillon was running comfortably in second when he suffered a flat tyre on the penultimate lap. He managed to keep going but dropped back to fourth, finishing behind Brad Keselowski and Kyle Busch.

Joe Gibbs Racing driver Busch had been at the front of the order in the first stage. He picked up the lead after passing Denny Hamlin at the restart after the first caution of the day but dropped back to second after a competition caution late in the stage.

Race winner Harvick instead won the first (and second) stage, ahead of Busch and Ryan Blaney.

Defending series champion Martin Truex Jr had an eventful day, having been forced to pit in the first stage after making contact with William Byron’s Chevrolet.

Truex managed to climb back to fifth at the end of the stage only for a slow stop to drop him back down the order, but a strategy call to stay out when Ryan Newman caused another caution allowed him to climb to second behind Jimmie Johnson.

Truex then picked up the race lead after Johnson pitted for fresh tyres, but came under pressure from Harvick as he tried to save fuel.

Harvick and Busch both passed the Toyota late in the stage as Truex attempted to keep going, but he was forced to come into the pits on the final lap of the stage after the pitlane was closed and incurred a penalty.

He ended the race 14th. Blaney finished fifth overall, falling backwards in the closing stages of the race, ahead of Kurt Busch, Aric Almirola and Hamlin.

Joey Logano was forced to work his way from the back of the grid, having sacrificed his ninth place in qualifying when he came into the pits to adjust his suspension before the race. He managed to finish 10th, two seconds behind Chase Elliott.