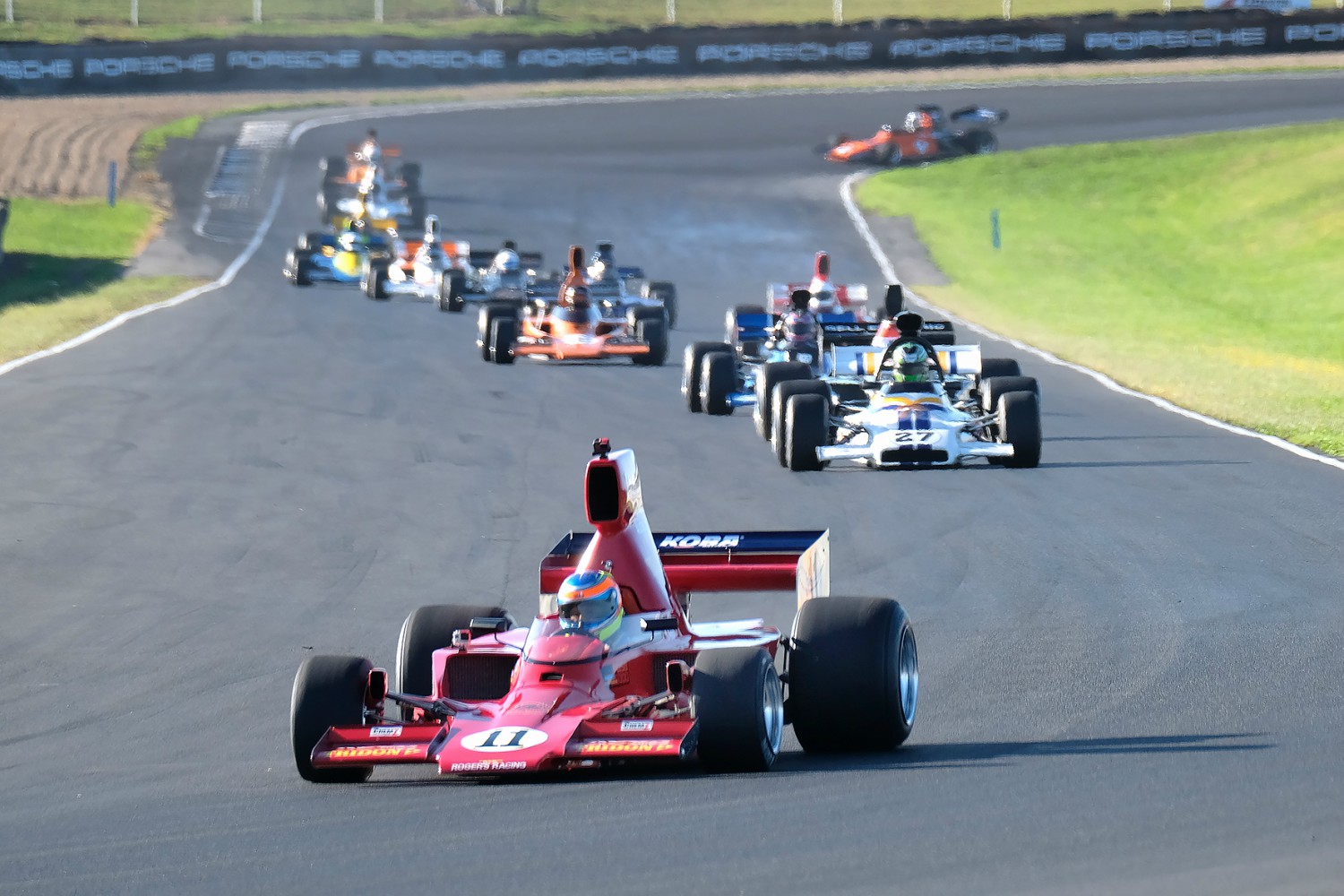 The stereotype-defying 75-year-old contesting his 60th consecutive season of national level motor racing in this country was in imperious form, winning all three category races from pole position and setting the fastest lap in the second and third.

All three SAS Autoparts MSC races were run on Sunday after the first, scheduled for Saturday afternoon, was postponed because the track surface was breaking up in the heatwave conditions.

Though the first race started at 8.20am the ambient temperature was still in the high 20s, and Smith said that because of that, as well as a number of oil spills during the day, conditions were slippery, particularly if you got off the racing line.

“Overall, I am pretty happy with the day,’ he said. ‘Though conditions weren’t that good, especially in that last race. You could see a trail of neat glossy oil all the way around, so you didn’t really want to put the acid down in case you swapped ends.”

Second in all three races and the driver who set the quickest race lap in the first race of the day was Andy Higgins in his Lola T332.

“Yes, he said. ‘the car is going well, we just didn’t get a handle on the track this weekend. Kenny had the same problems but he obviously he got a better handle on it than we did!!”

Third in each race after what he agreed was one of his best and definitely most consistent SAS Autoparts MSC series race weekends was Aaron Burson in his McRae GM1.

Despite heavy pressure from series points leader Michael Collins in the final race Burson held on to third place and declared himself well pleased with the efforts of everyone in his family-run team.

“It’s just been one of those weekends where everything just clicked, “ he said. “The car went really well. It had good grip, the engine ran strong and I guess I responded to that.”

Young gun Michael Collins had a mixed weekend, pulling out of the opening race with a gear selection issue, but (once it was identified and fixed) working his way back up to sixth in the second race (from the rear of the grid) before finishing fourth behind Smith Higgins, and Burson in the 12-lap final.

A move on fellow McRae driver Burson was on the cards mid-race, the pair side by side at one stage, until Collins ran wide on the outside and lost his momentum as Burson held his line.

“I got into the marbles,“ Collins said, “and I understeered off the track. By the time I had gathered it all up Aaron was gone.”

Defending SAS Autoparts MSC series title holder Brett Willis (Lola T330) was always in the mix, collecting two fourths and a fifth, the later in the 12 lap final where early on he and category newcomer Tony Galbraith enjoyed a spirited dice.

After sorting out some issues with his Lola T332 at Taupo last weekend Galbraith said he was just happy to have a quick and reliable car so he could focus on getting a feel for it under racing conditions.

After some giant-killing performances in the first two races Class A standout David Arrowsmith (Lotus 70) was brought down to earth in the final race, finishing a hard-earned tenth.

“ I had the inside line between Turns 1 and 2, but half way down the straight everybody started coming across and I had nowhere but the grass to go. By the time I got back on the track everybody had got past.

UK-based series regular Greg Thornton (Chevron B32) ran as high as fifth early on before pitting and ending up classified 13th.

Having worked hard all week to build a new engine after problems at Taupo last weekend Talon MR1A driver Grant Martin was rewarded with a weekend best seventh place in in final, ahead of Shayne Windelburn (Lola T400) who managed to hold off former series title-holder Ian Clements for his own weekend-best eighth place.

Earlier in the day the second SAS Autoparts MSC Series race was another Ken Smith benefit with all 18 cars starting and finishing. The only real issue came late in the race when Greg Thornton left a trail of oil spray behind him as he drove to fifth. The oil came from a fractured oil cooler leaking the hot fluid onto his Chevron’s mufflers.

An embarrassed Thornton said he only realised the oil smoke was coming from his car when he crossed the finish line, and wondered aloud why he had not been shown the mechanical/oil flag earlier.

The good news for young gun Michael Collins was that the gear selection problem that saw him pull off the track with just two laps to go in the first race was traced to a broken weld in an external selector rod which was easily fixed.

Though he had to start the second race from the rear of the grid the 21-year-old worked his way up to sixth place at the flag, only stopped from getting closer and in a position to pass Thornton by the oil spray coating his helmet visor!

After tangling under brakes into Turn 2 on the opening lap, meanwhile, both Glenn Richards and Ian Clements were able to continue, finishing 12th (Ian) and 13th (Glenn) respectively.

Smith’s winning run started first thing on Sunday morning with a runaway win in the first SAS Autoparts MSC race of the weekend which had been postponed from Saturday.

With sections of the track repaired overnight but still slippery Smith burst into an early lead and quickly built a buffer as Michael Collins and Andy Higgins scrapped over second place.

Behind them Aaron Burson held fourth place from Brett Willis who in turn had Greg Thornton trying to find a way past.

David Arrowsmith was again the quickest of the Class A runners, starting eighth and finishing sixth, this time ahead of a Lola freight train led by David Banks with Tony Galbraith, Glenn Richards and Ian Clements finishing the race line astern.

Having missed the qualifying session on Saturday morning Grant Martin drove from the back of the grid up to 12th spot in front of Shayne Windelburn, Tim Rush (McLaren M22) and Peter Burson (McRae GM1).

Just when it looked like Collins and Higgins would share the podium with Smith, Collins slowed and pulled off the track with gear selection uses with two laps to go.

Grabbing the opportunity with both hands Higgins put down the hammer, setting the quickest race lap as he started to close the gap on Smith, reducing it to 2.951 by the time the flag came out.

The category is one of five supporting the Toyota Racing Series at Hampton Downs this weekend. Others include the TradeZone GT3-GT4s, Nexen Tyre Mazda Pro 7s, Motul Honda Cup and Formula Libre and Historic Formula Ford.

Winning return for Ken Smith in F5000 at Taupo