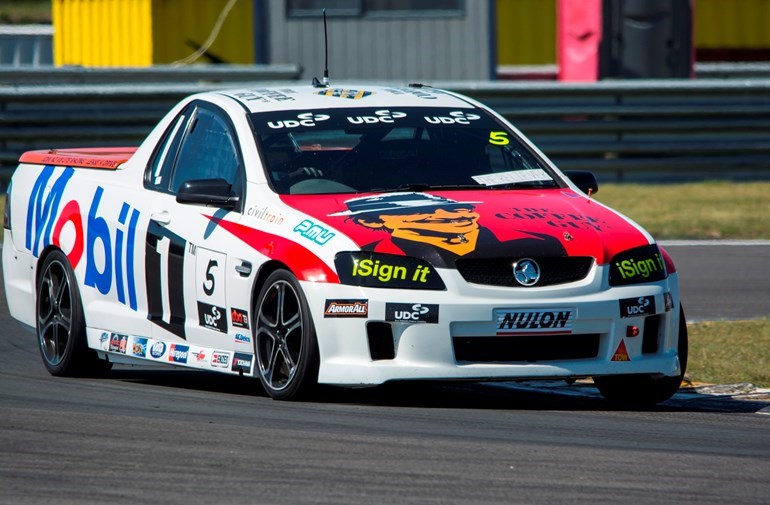 New Zealand motorsport veteran Andy Booth will make a return to racing this weekend at the Pukekohe ITM 500, driving in the UDC V8 Ute series.

“Originally a good mate Peter Ward rang me and wanted to know if I wanted to come out of retirement and come have a play in the utes. That was actually before [round one], and it wasn’t really feasible or possible,” Booth told Driven earlier today.

“But then when the utes got on the bill for the Supercar weekend, again, it was just a quick conversation with Peter — he said ‘why don’t you come and have a play,’ and I thought yeah why not; it’s about time I got my bum back in a race car. […] The utes are such a fun-based category, and — for me to get back into motorsport — that’s what I wanted, to have a good time with some good people and enjoy driving again.” More recently, Booth was a foundation competitor in the V8 SuperTourer series. But after a string of competitive results in his Woodstock Commodore, Booth pulled the plug on the class at the beginning of 2014.

“I ended up taking a big step back from motorsport at the start of 2014 after something like 26 or 27 consecutive full time seasons of racing, both here and overseas. With the fractious and toxic environment that had developed around the V8 categories in New Zealand, I was ready to step back. […]It helped during that first year off that my wife and I had our first child, which has been a huge distraction for the last 12 months,” explained Booth.

“I think that they [the NZ SuperTourers and NZV8s] have taken the step that they had to be made. For a long time everyone’s openly waxed lyrical about what was right and wrong.

“I think we’re kind of past that and the reality is that none of the attempts to create a new direction for top level V8 racing in this country worked, and what they got left with was a bunch of interesting equipment sitting around that was going to become obsolete unless they all got together and played in the same sandpit. I’m glad to see that’s what’s happened.”

“What they’ve got at the moment looks good, and seems to be providing some good racing, so just let it be what it is right now and let it develop from there.” At this stage, the ute drive is a one-off performance, but Booth couldn’t rule out the potential for him to possibly return to the revised NZ Touring Car series.

“I’d have to seriously think about whether I have the time available to commit to a full time driving role, but hopefully there’s some [endurance] styled racing in the future for this new V8 class. I’d love to be able to assist some of the drivers in a co-driver role, definitely, if not as a main driver,” he said.

Despite his resume, a ute victory isn’t assured for the driver, who will have to face the might of his former NZV8 and NZ SuperTourer sparring partner Paul Manuell, as well as several other high-profile racers.

“The other thing I’m really looking forward to this weekend is getting back on track with my old mate Mr. Manuell. Paul and I have been friends for a lot of years, and we’ve got a lot of history, so it’ll be fun to just get out there and go head-to-head with him again.” The ute Booth will be using, a Holden VE Commodore, has pedigree at the ITM 500 event. In 2014, Jack Kofoed utilized the ute to good effect — coming within a whisker of claiming a maiden race win, finishing second to the late Peter Robb. The margin of victory was a mere 0.160s — the smallest winning margin in series history.

The UDC V8 Ute series will be the first category to hit the circuit for practice, doing so on Friday morning at 8.20am. Their qualifying session will then start at 12.05pm before they grid up for their first race of the weekend at 10.00am on Saturday morning.

GTRNZ out, V8 Utes in for ITM500 at Pukekohe