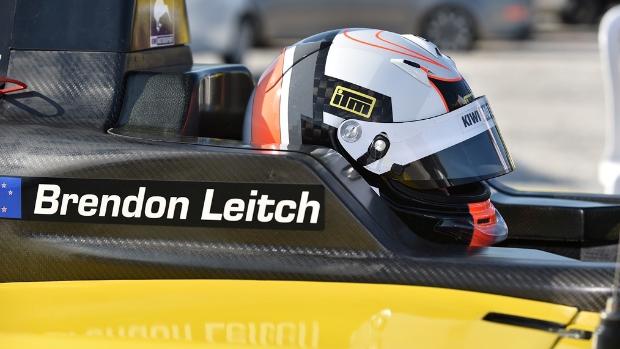 Kiwi Motorsport driver Brendon Leitch of Invercargill, New Zealand, charged his way from starting from last place from pit lane to claiming his maiden victory in the first race. Skylar Robinson of Augusta, Georgia, also scored his first F4 U.S. win of the season in Race 2 after starting in P11.

“Having experience racing in the rain really paid off for us today,” said Leitch. “It rains quite often in New Zealand so I race in conditions like this a lot. My team worked extremely hard to get me to the podium. My first win in America has been poetic.”

After heavy rains coated the track before Race 1, F4 U.S. officials presented the teams with the choice of running on Pirelli P Zero slicks or wet tires. Seven drivers risked competing on slicks, while the rest of the field switched to wets. Front-row contenders Kyle Kirkwood of Jupiter, Florida, and Jacob Loomis of Corinth, Texas, both chose to run wets.

As the cars waited in the pre-grid, skies cleared, creating inconsistent track conditions. During the formation lap, Jordan Sherratt of Durban, South Africa, who was one of the seven competitors on slicks, hit water, spinning in Turn 3. The Crosslink Racing pilot collected Leitch in the accident, and the pair flew off track. Damage was not sustained to either car, and both competitors continued, starting from pit lane. Further down the field, Mathias Soler-Obel of Bogota, Colombia, and Chris Archinaco of Pittsburgh suffered a race-ending accident in Turn 5. A full-course yellow suspended the start of the race. Raphael Forcier of Montreal, Ben Waddell of Denver and Jim Goughary Jr. of Jupiter, Florida, utilized the prolonged-start as an opportunity to pit and switch to slicks.

Kirkwood bobbled on the side-by-side rolling takeoff and Loomis slid his way into P1 with Baltazar Leguizamon of Buenos Aires, Argentina, close behind. Leguizamon passed Loomis before shunting on a slick Turn 11.

On slicks, Austin Kaszuba of Burleson, Texas, shot from his mid-field position to the outside of Loomis and Kirkwood. On a three-wide overtake on the straight, Kaszuba captured P1. Loomis and Kirkwood started to fall behind in standings as drivers with slick tires started to gain speed on a drying track. Kaszuba increased his momentum, creating nearly a 10-second lead over second-place Leitch.

As Kaszuba was making his way to the finish line uncontested, heavy rain moved in, causing the track to retain water. On the penultimate turn, Kaszuba hit a standing puddle, looping his car off track. The Crosslink Racing pilot watched from his car as Leitch took the checkered. Sherratt placed second, his highest finish this season, and Forcier would round-out the podium.

“It was extremely disappointing to wreck so close to the finish line,” Kaszuba said. “It was a difficult race. We made the gamble with the on slicks, which was the right decision Today was a learning experience. If I could choose anyone else besides my teammate Jordan to get the win, I would choose Brendon. He’s a great competitor and deserved it.”

Race 2 of the weekend, was deemed a wet race as rain continued to fall. A majority of the session was under yellow due to several accidents. Kirkwood, who started in P10, successfully maneuvered his way through the carnage to seize the lead. Timo Reger of San Antonio, Texas, followed closely behind Kirkwood. His run ended in a cringing on-track 180-spin in Turn 2. All subsequent cars dodged Reger, and he and his car were unharmed.

Using Kirkwood as a reference, Robinson started his attack off the restart. Kirkwood caught water, spinning his tires. Robison used that mistake to make an outside-move to pass. The two veteran drivers battled side-by-side for position going into the Keyhole. Their tires interlocked briefly, shooting Kirkwood wide. Robinson dropped to defend the inside racing line. The Momentum Motorsports pilot protected his lead, holding Kirkwood to P2.

With minutes left in the race, another yellow was thrown. The session ended in yellow and Robinson captured his first win since his last visit to Mid-Ohio in 2016. Kirkwood finished second and Leitch grabbed third.

“It is an incredible feeling to be back on the podium. We have had a difficult start to the season and this win really builds confidence,” said Robinson. “I knew Kyle would come back aggressively after I passed him. Knowing the track and racing here before in the rain really assisted me in holding him off.”

The final round of the F4 U.S. mid-season event will be held on Saturday at 11 a.m. Fans can view full results at F4USChampionship.com.