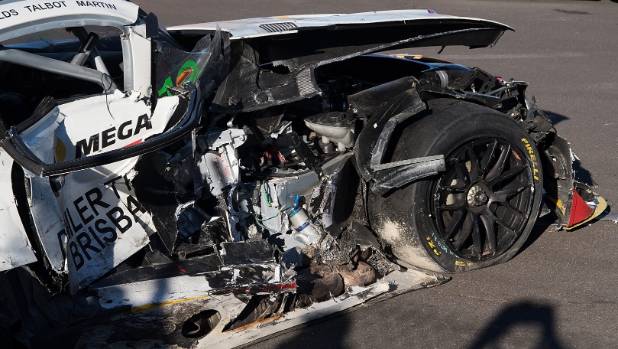 V8 Supercars could soon be fitted with warning systems to alert drivers of cars stranded on race tracks.

The Supercars Board has tasked its Commission to investigate additional warning systems to alert drivers when the track is blocked ahead.

Its investigation comes in the wake of a sickening collision that brought a premature end to the Bathurst 12 Hour race earlier this month.

Audi driver Ash Walsh was left stranded on the racing line following a crash in a tight section of the track between Sulman and McPhillamy Park.

Several drivers were able to avoid Walsh’s stranded car before John Martin’s Mercedes made brutal contact with the stationary Audi.

Walsh and Martin were hospitalised before being cleared of serious injury.

But not wanting a repeat, the Supercars Board has tasked the Commission with researching technology that could help warn drivers of a potentially dangerous situation.

The Walsh and Martin incident was not the first time a stationary car has been struck at Bathurst.

Kiwi driver Mark Porter was killed as a result of a similar collision in 2006.

Porter was driving in the development Supercars Dunlop Series, which was called the Fujitsu V8 Supercars series at the time, when he crashed at the Reid Park section of the historic Bathurst circuit. His vehicle was then hit by fellow driver David Clark, who did not see Porter’s car.

Two years later, Paul Weel had to be cut from his car and was flown to hospital after he spun on the same section of the track (Reid Park) and was t-boned by Chris Pither in a Team Kiwi Falcon during practice for the Bathurst 1000.

“That was a very serious incident at Bathurst,” acting Supercars CEO Shane Howard told Supercars.com of the Walsh and Martin accident.

“It really shone the spotlight on the focus of giving the drivers every opportunity to wash off speed to avoid that sort of incident.

“It was discussed at Board level, the Board agreed to task the Commission with looking at early-warning systems to consider what could be implemented in-car or through marshals trackside.

“It could be a warning system in-car, which could potentially be activated from, say, race control in a serious situation when the circuit is blocked.

“The Commission will investigate what’s going to be the best system, then make a recommendation to the Board for approval,” Howard told Supercars.com.

Following the 2008 crash, research was conducted to try and find a warning system for drivers but it was hindered by a lack of suitable technology.

Howard said that any advanced warning systems for the 2018 season and beyond would again be reliant on technology.

The Commission is likely to investigate the possibility of alerts on the dash inside drivers’ cars and trackside warning lights amongst other measures.

When Howard was asked if it was likely a warning system would be in place for this year’s edition of Bathurst, he said; “The view is to find the right system that works that is absolutely foolproof and then to implement it as soon as possible.”

“It’s got to be a 100 percent foolproof system.

“There’s always still the marshals and the flag marshals, but this would be a system that drivers could benefit from an instant warning,” Howard told Supercars.com.

“It’s hard sometimes, the drivers are in the heat of battle and may be obscured from a flag or something.”

McLaughlin has ‘biggest’ ever head-on crash in Supercars testing