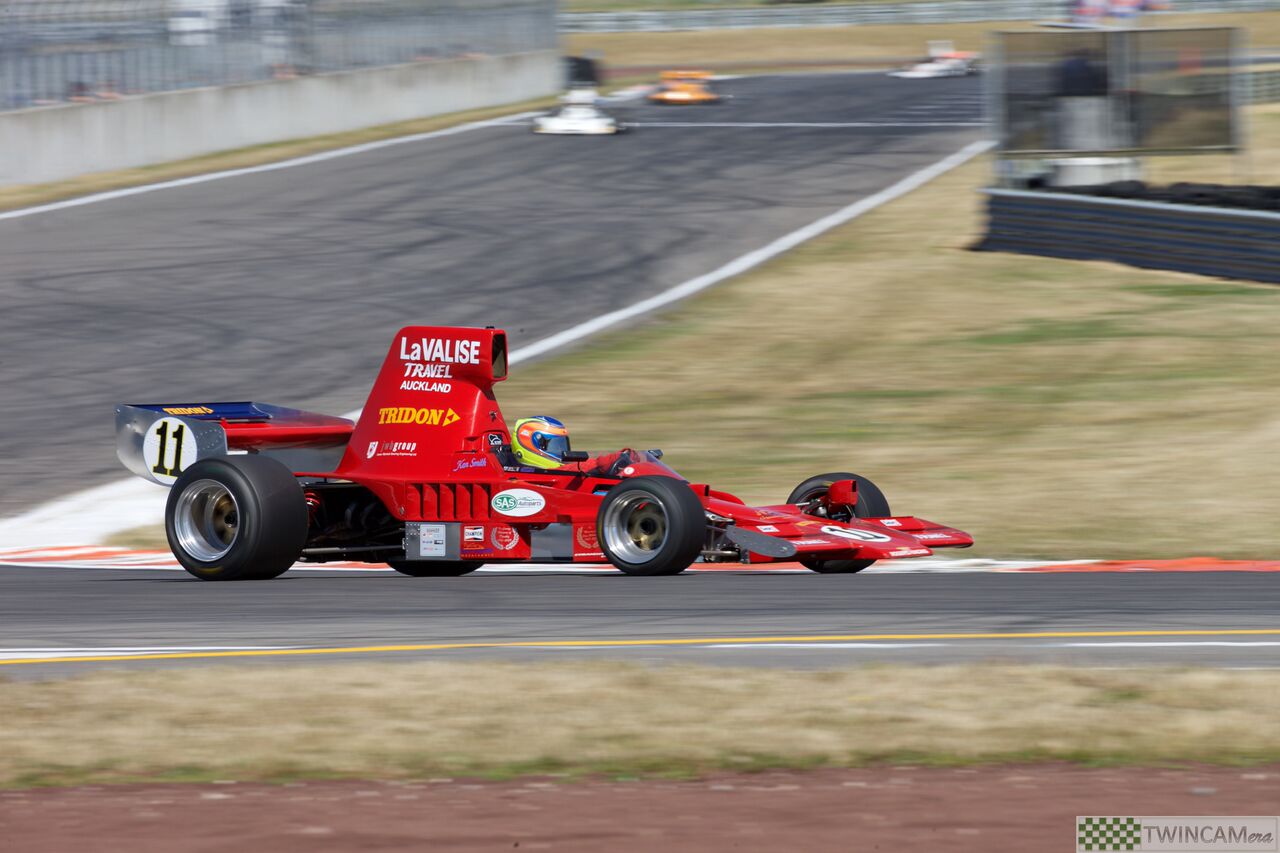 Entries for the 2018 Taupō Historic GP this weekend at Bruce McLaren Motorsport Park have closed with a line-up of 99 cars and 43 motorcycles.

One of the finest collections of historic racing cars in the same place at the same time this summer, the cars have 14 races in five categories – Formula 5000, Historic Touring Cars, Historic Muscle Cars, Historic Sports Sedans and Formula Juniors.

The motorcycle racing features a capacity field for the Hyosung Cup brought to Taupō for the weekend by Hyosung Cup and Bruce McLaren Motorsport Park sponsor, English motorcycling enthusiast (as well as world-famous DJ), Carl Cox.

The feature category that will contest the Historic GP Trophy is Formula 5000, the 500 bhp mainly small block Chevrolet-powered single seater category that rivalled and occasionally beat their contemporary Formula 1 rivals in combined races held in-period – 1968 to 1974.

After a preliminary race on Saturday afternoon and another on Sunday morning, septuagenarian and five-decade racer legend Ken Smith MBE will be eying to go one better than last year when he finished second after a race-long battle with Englishman Michael Lyons – the outright win in the Historic GP Trophy race that book-ends the weekend’s programme. Young guns Andy Higgins (like Smith, driving the ubiquitous Lola T332-Chevrolet) and Michael Collins (MacRae GM1-Chevrolet), along with a host of F5000 series regulars in the 19-strong grid, will keep Smith honest.

England’s Greg Thornton has entered two cars from his stable – the only F5000 to ever beat the F1s in a combined race, the Chevron B24 that was driven to victory in the 1973 Race of Champions by the late Peter Gethin and Thornton’s March 75A powered by the formula’s quad-cam, stock-block-engined alternative to the Chevrolet, Ford’s 3.4 litre V6 touring car engine that was re-designed by Cosworth for the third generation of the famous ‘Cologne’ Capris.

Ford’s other F5000 engine from the era, the Boss 302, powers the only other non-Chevrolet-powered car in the field, David Arrowsmith’s 1971 Lotus 70B ‘wedge’.

Many touring cars with important histories are in action competing for the second trophy on offer this weekend, the Taupō Tourist Trophy.

In the HMC class for pre-1978 touring cars of more than 3000cc engine capacity with a period racing history in the New Zealand Saloon Car Championships of the late 1960s and early 1970s, Ford’s mighty Mustang out-numbers Chevrolet’s Camaro, 8 to 4. The HSC class is dominated by European Ford products ranging from Anglias, Lotus Cortinas and Escorts to Capris. 29 cars face the starter’s lights in the HMC/HSC category.

The Historic Touring Car category sees two-time World Touring Cup winner Paul Radisich re-united with a beautifully prepared example of the Group A 2.3 litre BMW M3 that he drove at Bathurst in 1988, now owned by Christchurch’s Peter Sturgeon. Main competition in the Group A class is likely to come from two DTM (2.5 litre) versions of BMW’s giant killing M3 in the hands of Graeme Cameron and Conrad Timms and from Brett Steven’s brutal 1987 turbo-charged Ford Sierra Cosworth.

The Super Touring class for cars up to as much as 10 years younger than the Group A BMWs is likely to be a close contest between Queensland veteran and former Holden HDT ‘works’ ace, Charlie O’Brien (1996 Nissan Primera), the similarly-mounted Phil Mauger (Christchurch), Lindsay O’Donnell in his very rare Volvo S40-STW and cousin Scott O’Donnell in his BTCC Ford Mondeo.

All big field of 19 Historic Sorts Sedans includes a class for Allcomers — which essentially translated to ‘anything goes’ — that with their heavily modified bodywork once dominated the New Zealand Saloon Car Championship in the wild and popular saloon racing days of the 1960s and 1970s. This includes what was probably the most legendary “Allcomer”, the 1967 New Zealand Saloon Car Championship winning Ford ‘Custaxie’ raced by Robbie Francevic. Revived by Wanganui’s Robert Bartley who bravely climbs into the monster this weekend, the VB-engined special saloon gained its name from the amalgamation of the words Customline (for its Ford Customline body) and Galaxie (for its Ford Galaxie 427-cubic-inch, 7-litre V8 engine, originally developed and tuned for powerboat racing). The Custaxie epitomised the height of Kiwi Allcomer saloon car design before the open rules were axed for the national championship in 1968.

19 Formula Juniors and Historic Formula 3 and Racing Sports Cars from the 1959 – 1964 era line-up for their three races. Conceived by pre-war Italian racer Count Giovanni ‘Johnny’ Lurani in a concerted effort to promulgate the development of a new generation of racers in his homeland, Formula Junior featured lightweight front or rear-engined single-seaters powered by production car engines of 1000cc and 1100cc. Front-engined examples entered this weekend include the very rare FMZ of Aucklander Nigel ‘Hunter’ Russell and Englishman Robin Longdon returns for his second Taupō Historic GP meeting in a FIAT-powered 1959 Stanguellini, the early Italian design that resembled a scaled-down Maserati 250F Grand Prix racer. Later English marques, Cooper, Gemini and Lotus dominate the rear-engined class. Keep an eye out this year for the Gemini Mk3A of Jim Barclay, Ian Garmey’s Cooper T56 in the hands of Garth Thomas, Phil Foulkes’ Lotus 20/22 and the pencil-slim BMC Huffaker Mk2 of Terrier Collier, built on the US west coast.

Qualifying sessions start on Saturday morning at 10:00 with the first race just before the lunch break at approximately 12:30.

Winning return for Ken Smith in F5000 at Taupo