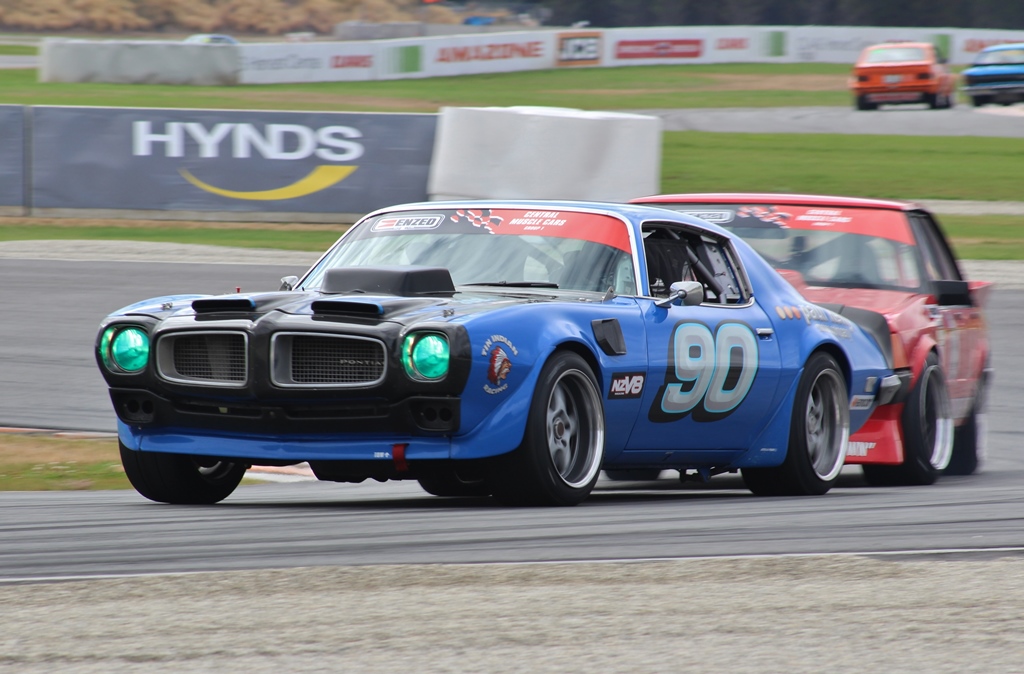 “Spectators also really enjoyed the well-supported Highlands Classic Motor Show,” says Highlands’ general manager Mike Sentch. “More than 100 vehicles were on display including a KC Bedford truck, stunning wooden get boats and retro caravans as well as a huge array of classic, retro and vintage cars, thanks to their passionate owners enjoying the chance to show off their pride and joy. The people’s choice winners were Trevor and Davina Mitchell with their amazing Excalibur Phaeton open-top roadster.”

Highlands’ events manager Melanie Kees says she couldn’t be happier to have seen so many people truly embracing the classic festival spirit.

“We’ve had a fantastic crowd, especially on Saturday – we’re absolutely thrilled with the turnout especially with so many events going on in the district this weekend. While the weather has been a mixed bag, people braved the odd shower to enjoy some amazing racing.

“The trans-Tasman muscle car battle between our own ENZED Central Muscle Cars (CMC) and Australia’s ENZED Touring Car Masters (TCM) has been an absolute beauty. Muscle car racing is just such a Kiwi thing, especially seeing models we identify with so readily like the Mustangs, Toranas and Monaros.”

Ms Kees says seeing so many people really getting into the spirit of the classic festival, dressing up in clothes from many eras was another highlight. “Our Fashion in the Field competition attracted a lot of entrants and to see huge numbers of families enjoying the day out and all the different entertainment options like the Spiderweb climbing frame, panning for gold and visiting the Highlands’ Jurassic safari adventure play ground has just been fantastic.”

Sentch says two-time Australian Touring Car Champion Glenn Seton, driving a 1964 Ford Mustang Coupe in the 33-strong TMC/CMC field, told him that the Highlands Festival of Speed was one of the best race meetings he’d ever been to.

“Naturally, it’s a real delight to have such positive feedback from a driver of Glenn’s calibre and we appreciate his and other people’s positive comments.”

With the Aussie Racing Cars starting their seven-round 2015 season at Highlands – the first time an Australian motorsport category has done so – the round win went to New South Wales’ Craig Woods in a Mustang from two Queenslanders, Simon Smith in a Falcon and Mark Griffith in a Euro GT. The Quinn family tussle was taken out by Tony Quinn who finished eighth for the weekend ahead of son Kent and son-in-law Kynan Yu. Meanwhile Highlands’ own race professional Andrew Waite went from hero with victory in the first race, to zero when he rolled his pocket rocket race car out of the reverse grid third race and was fortunate to be handed the Aussie Racing Car of series founder Phil Ward in order to complete the fourth and final ARC race of the weekend.

The vintage and historic open wheelers attracted 22 entrants with UK visitor Robin Longdon in a Lotus 20/22 taking the largest points’ haul for the weekend. Race wins also went to Dunedin’s Paul Coghill in his 1952 Jaguar Special, Invercargill’s David Robertson in his 1959 Ace Buckler and Western Australia’s Neil McCrudden in another Lotus 20/22.

Victory in the modern classics went to Timaru’s Brent Collins who took four race wins in his Mazda RX7 ahead of the Honda Civic of Prebbleton’s Daniel Cropp and the Porsche GT2 of Christchurch’s Guy Stewart.