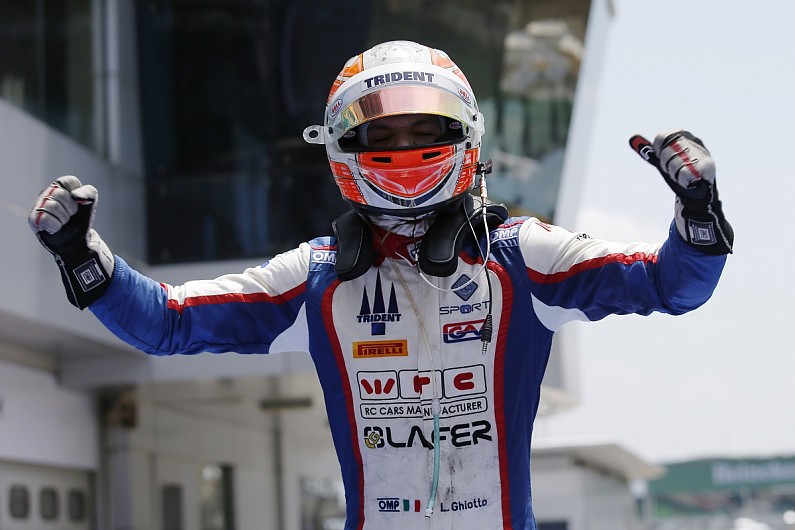 Luca Ghiotto claimed his first GP2 win with victory over Raffaele Marciello in the sprint race at Sepang while Pierre Gasly clawed back vital points in his title fight with Antonio Giovinazzi.

Ghiotto started second on the grid and he grabbed the lead on the exit of Turn 2 from polesitter Mitch Evans, who had edged ahead at Turn 1 after losing the lead off the line to the Trident driver and Russian Time’s Marciello.

Prema Racing’s title protagonists Gasly and Giovinazzi both lost positions at the start and were just beginning to move back through the field when the safety car was deployed after Racing Engineering’s Norman Nato and Jordan King collided at Turn 2 on the second lap.

Nato’s car was stranded in the middle of the track but was quickly recovered and King was later given a ten-second penalty for hitting the rear of his teammate.

At the restart, Ghiotto leapt clear as Evans fell behind Marciello while in the middle of the pack Gasly and Giovinazzi made their way past Sergey Sirotkin, who was struggling with a gearbox problem that would later cause him to retire his ART car.

Approaching one-third distance, Oliver Rowland and Giovinazzi passed King in a double move into Turn 1 and a few corners later the MP Motorsport driver edged the championship leader onto the runoff area at the exit of Turn 4.

As a result of losing momentum, Giovinazzi fell behind King and Gasly but the Prema pair passed the Briton at the final corner later on in the lap.

From there, they caught and passed Rowland on successive laps as Gustav Malja, who had surged up the order from 11th on the grid with a brilliant start, attacked Evans for third.

After a long battle, the Rapax driver eventually passed Evans as the race entered its final third Gasly and Giovinazzi then swiftly demoted the New Zealander to sixth.

Up front, Marciello had closed the gap to Ghiotto and set up a tight end to the race, while Gasly and Giovinazzi were both handed another place when Malja locked up and went off the road at Turn 9.

Marcello pressured Ghiotto for the final few laps but could not get by and the Italian driver held on to become the tenth different winner of the season.

Gasly resisted late pressure from Giovinazzi to hold onto third and close the gap in championship to seven points heading into the final two races of the season.

Malja finished fifth ahead of Evans and ART’s Nobuharu Matsushita, with Rowland, Johnny Cecotto and Nicholas Latifi rounding out the top ten.

DAMS’ Alex Lynn endured a tough race after falling down the order from fifth on the grid early on and he finished 12th, two places ahead of King, who had come in to serve his penalty and take a new front wing in the hope of a late race safety car closing up the pack.