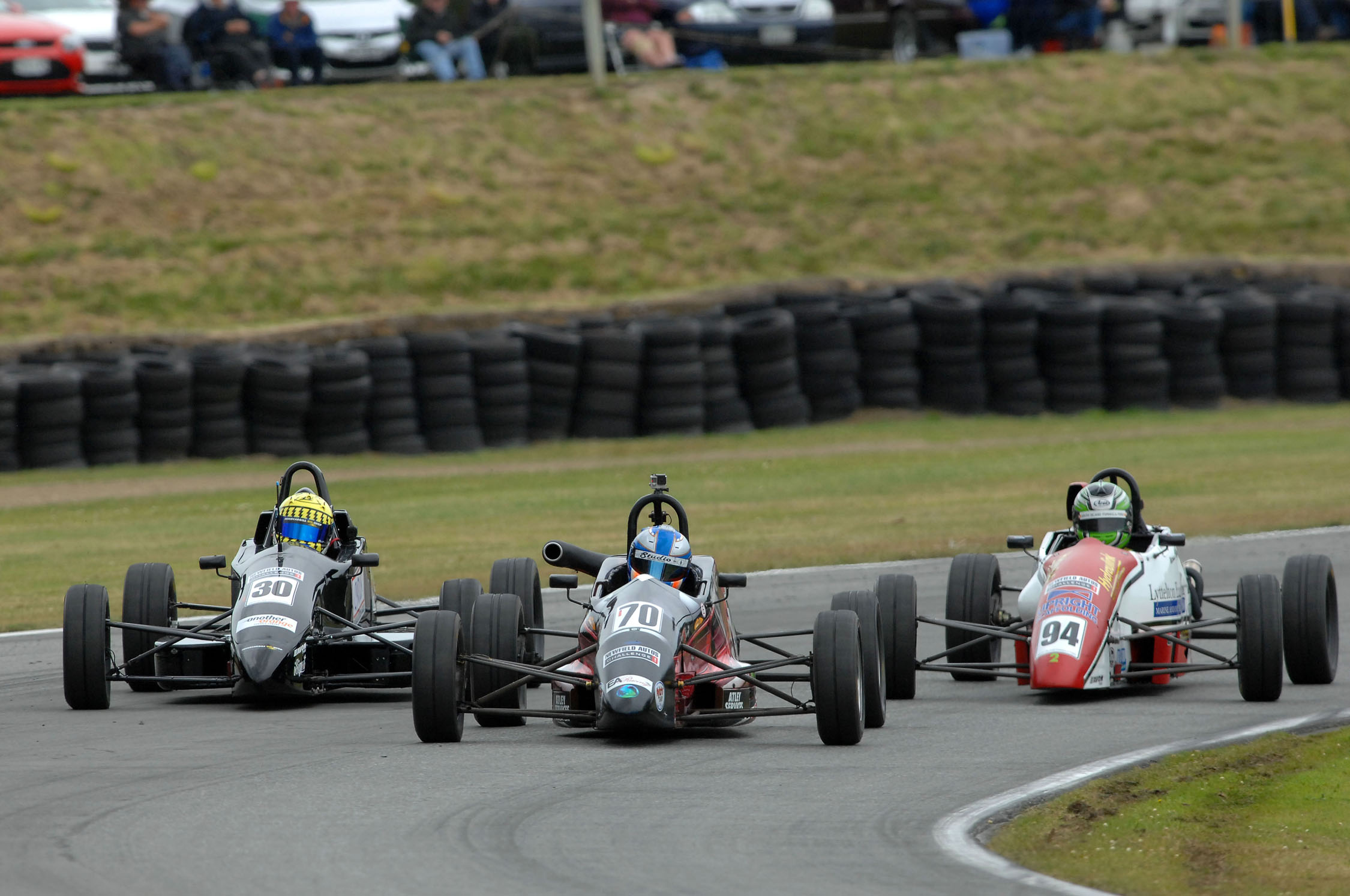 Local track knowledge of Teretonga Park in Invercargill may have been enough advantage for Southland’s Ethan Anderson to break points leader Liam Lawson’s run of nine straight Formula 1600 victories. The Riverton electrician missed Fridays’ wet practice sessions but went on to win the opening race on Saturday at the third round of the 2016/17 New Zealand Formula 1600 Championship which also doubled as the penultimate round of the South Island Formula 1600 Championship. Pukekohe’s Liam Lawson was back to his best winning both Sunday’s races as the Southland weather determined the fate of a number of drivers.

“It was good to finally get a win this season so really happy with the result,” commented Anderson. “We missed practice in the rain on Friday because of work commitments which would have helped us with the rain on Sunday.”

Lawson (Mygale SJ08a) set fastest time in qualifying and proceeded to lead the opening race on Saturday afternoon in dry conditions. However, Anderson (Van Diemen RF93 Stealth) made his move in the latter part of the 10-lap race.

“I managed to closely follow Michael (Collins) and Liam (Lawson). I made a move and passed Michael on the penultimate lap then got a great run out of the final corner and drafted Liam on the main straight enabling me to get round him through the sweeper (turn 1).” Lawson finished second followed by Collins, Henry Thomas-Kircher (Ray 87) and Jordan Michels (Mygale SJ13).

Lawson has extended his lead over Christchurch rival Michael Collins (Van Diemen RF91) who, after finishing second to Lawson nine times, dropped to third in the first two races and retired from Sunday’s 17 lap feature race.

“Sunday’s race was eventful,” commented Collins who is driving an older Class 2 car. “I had an average start, got up to second, spun the car and dropped back to fourth or fifth. I was able to get back to third before problems with water in the electrics forced me to retire.”

While still placed second overall in the national and leading the South Island championship, Collins retirement sees his position in both series now coming under threat. Anderson is just nine points adrift in third on the national points table while Lawson is 12 points behind in the Southern derby.

Rising to the wet conditions on Sunday was Anna Collins (Van Diemen RF94). Sister to Michael, Collins won the Class 2 national championship last season and has since moved up to a Class 1 car. After finishing 10th and 7th in the first two races, Collins had an outstanding drive to fourth in the final feature race.

“It was a good result from a challenging race,” commented Collins. “They were the most difficult conditions I have ever driven in so thrilled with a fourth place. It was a matter of staying on the track and away from other drivers. I have always enjoyed racing in the wet so was never worried. Teretonga is my favourite track so the results helps my championship points.”

“We struggled in testing on Friday and in qualifying our throttle stuck open on Saturday morning,” commented Michels. “Then an engine miss the opening race affected us but with the issues we had the result (5th) was OK”

“Sunday was a great turn around. We started 5th in both races and finished 2nd, so a great weekend of improvements and moving forward. We are still looking for that elusive win but have two rounds left in the championships.”

Heading north for the final two national rounds, Lawson has a healthy 89 point lead over Collins and leads Class 1. Collins continues to lead Class 2 but in Class 3 Invercargill’s Joseph Oliver (Begg FM3) has over taken Christchurch’s Andy Downs (Lola 642a). The next round is at Taupo in two weeks time followed by the finale at the NZ Grand Prix meeting in Feilding a week later.