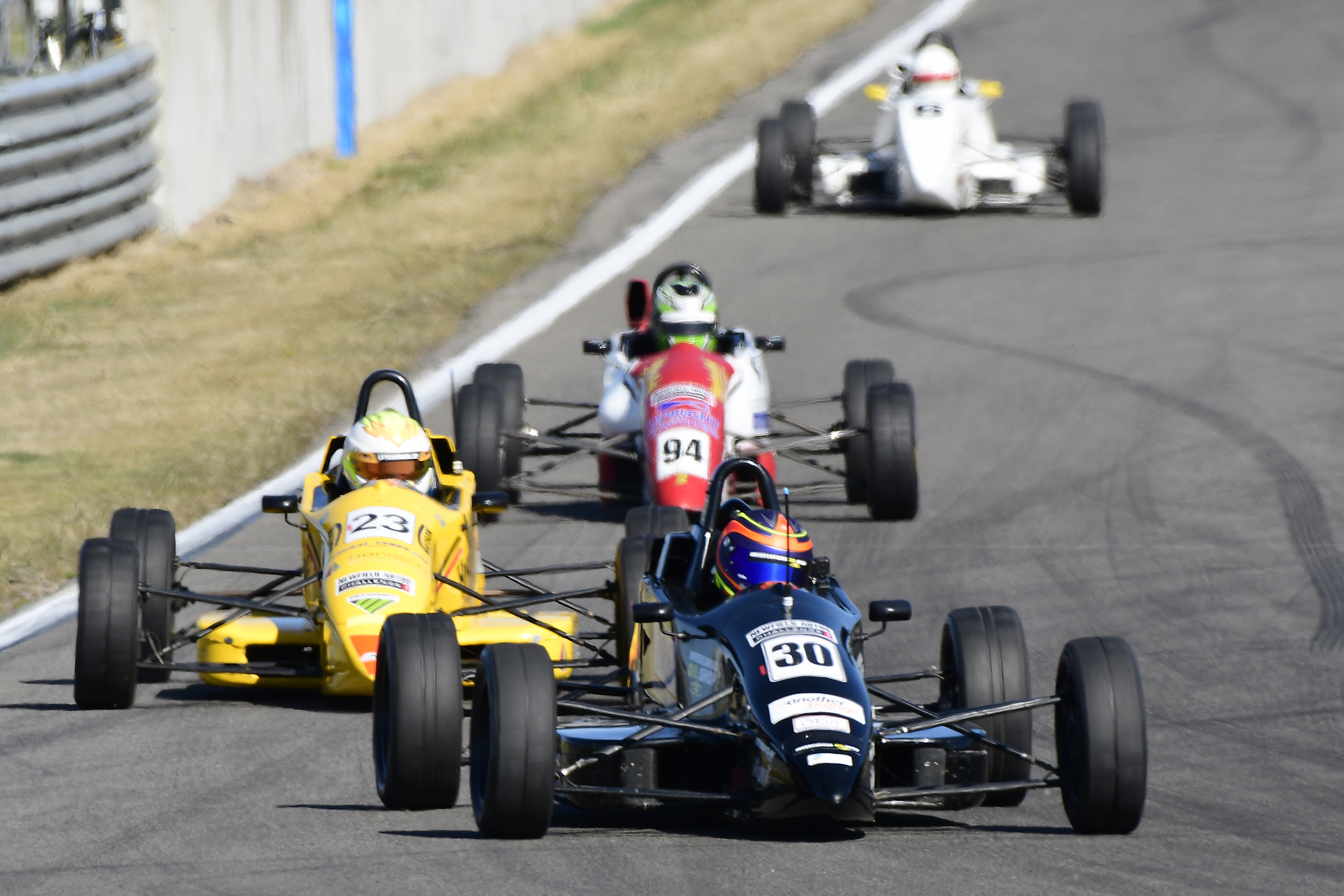 Pukekohe teenager Liam Lawson has one hand on the New Zealand Formula 1600 Championship title heading to the final round this coming weekend at the NZ Grand Prix meeting at Manfeild Park in Feilding.  Three race wins and fastest lap in qualifying at the Bruce McLaren Motorsport Park in Taupo over the weekend allowed the 14-year-old to maximise available points from the fourth round of the series.  With just three races left and a maximum of 121 points on offer, Lawson (Mygale SJ08a) has a 110 point lead over nearest rival Christchurch’s Michael Collins (Van Diemen RF91).  Southland’s Jordan Michels (Mygale SJ13) has moved up to third overall from Riverton’s Ethan Anderson (Van Diemen RF93 Stealth).

“We’re absolutely stoked to be where we are after the weekend,” commented Lawson.  “The first two races were reasonably straight forward as the guys behind me were fighting which allowed me to get away and put a gap on the field.

“In the third race Jordan (Michels) got a great start from P2 and stuck with me for a number of laps.  But as planned, the car came on strong for the second half of the race and allowed me to put a gap on second place.”

Pre-race qualifying wasn’t straight forward with oil left on the track from the previous qualifying category.

“I was able to set the fastest time on my first flying lap,” said Lawson.  “Then another F1600 driver dumped more oil on the track making it too difficult for any of us to go any faster.”

Chasing down Lawson and the only competitor now with a mathematical change of taking the title is Michael Collins.

“The round went reasonably well for us,” commented Collins.  “We had an engine miss in both testing and qualifying so was gutted with third fastest.  We eventually discovered problems with the distributor cap.  Once replaced we were back on the pace.

“Saturday’s race was a great fight with Ethan (Anderson) and went on to finish second as well as the first race on Sunday morning.  Sunday was hot and in the feature race I didn’t have the pace of Jordan (Michels) and Liam (Lawson) so finished third, but second overall for the round.”

After three rounds in the South Island, a large number of southern drivers headed north for the final two weekends in Taupo and Feilding (Manfeild Park), joined by a number of North Island drivers. Consistent top ten performances from Auckland’s Grant Campbell (Van Diemen RF05) and Invercargill’s Steve Heffernan (Van Diemen Stealth) have seen them move up the overall points ladder to fourth and fifth respectively.

The final round of the series takes place this weekend at Manfeild Park in Feilding as part of the New Zealand Grand Prix meeting for the 2017 Castrol Toyota Racing Series.