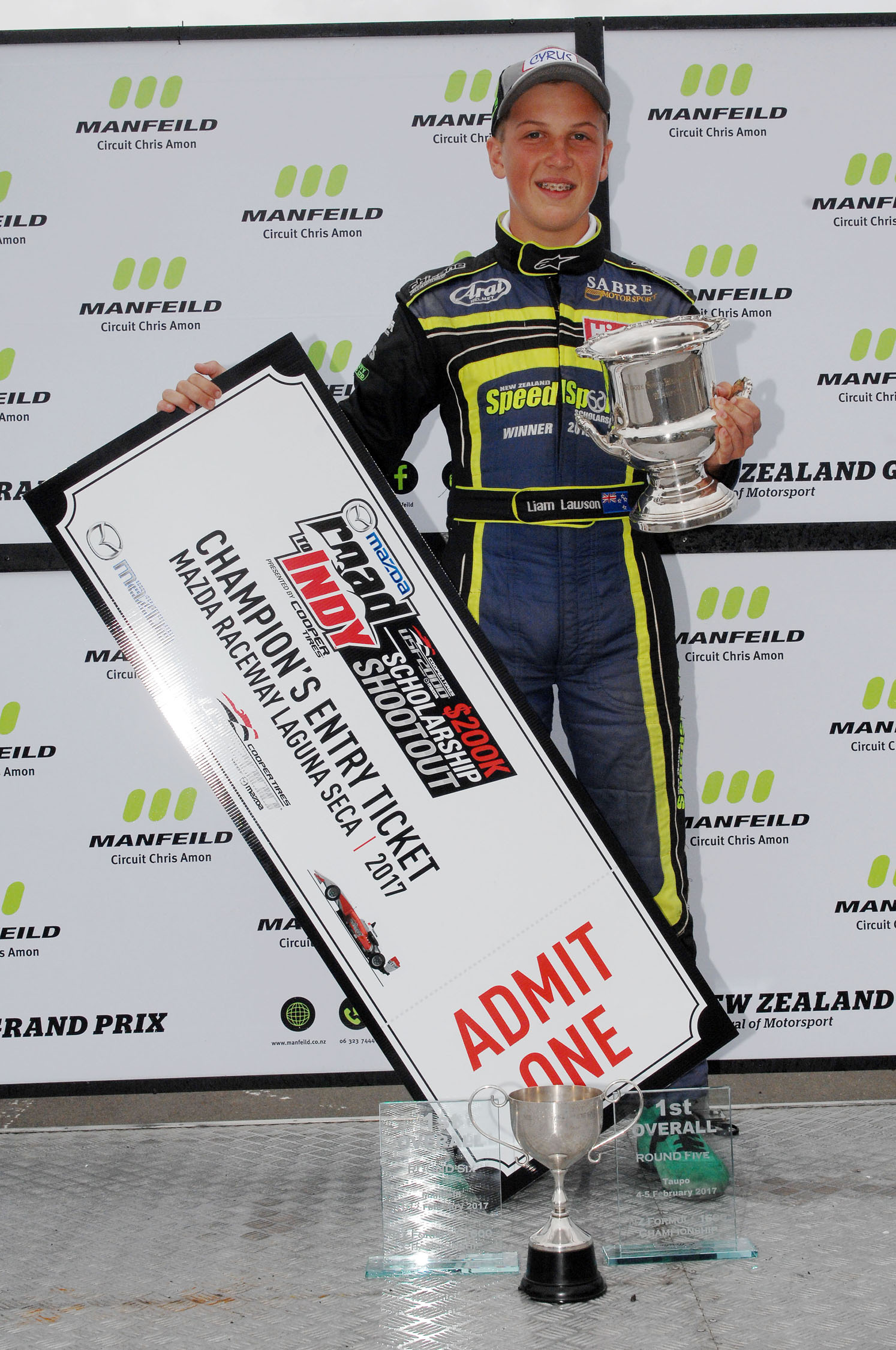 Pukekohe’s Liam Lawson has continued on his winning way claiming the 2016/17 New Zealand Formula 1600 Championship title at the final round held at Manfeild Park over the weekend. The 14 year old sealed the championship in the first race of the weekend, putting any chance of Canterbury rival Michael Collins beyond reach. The final of five rounds held as part of the NZ Grand Prix meeting provided some of the best racing of the season right throughout the field.

“It’s fantastic to have achieved this,” commented Lawson. “We’ve worked very hard and had the support of heaps of people. To finally pull it off was just outstanding for the team.”

Since starting the series at Timaru last November, Lawson (Mygale SJ08a) won 14 out of the 15 races, set fastest time in qualifying in all five rounds and won the Class 1 category.

“This weekend hasn’t been straight forward,” said Lawson. Michael (Collins) battled with us throughout the weekend exchanging the lead numerous times.

“In the first race I only just got back the lead on the very last corner. In race two Jordan (Michels) was battling with us as well. The final race was the best of the weekend, again fighting with Michael. He’s such a good driver you know that you can trust him, that he won’t push you off the track.”

Collins driving an older Van Diemen RF91 won the Class 2 category, finished second for the round and runner up in the NZ F1600 Championship.

“I’m thrilled to have finished second overall,” commented Collins. “The racing this weekend was the best so far and our car really suited this track”

Class 3 results were turned ‘on their head’ after points leader heading into the final round, Southland’s Joseph Oliver, was excluded from the weekend’s results.

“It was not a good round,” commented Oliver (Crossle 55F). “We got a technical infringement and got excluded from the meeting and points. It’s pretty gutting but we are going to learn from it and come back.”

The Class 3 title went to Christchurch’s Andy Downs (Lola 642a), a reluctant winner.

“Joseph (Oliver) had it all over me for the season, driving really well,” Downs said. “I’ve come home second most meetings. He has had a couple of ‘dnfs’ and now the exclusion so the loss of points has cost him dearly.

“We would have much rather beaten him on the track but that is the way it is.”

As part of winning the 2016 NZ F1600 title, Lawson now has the opportunity head to the US later in the year to attend an international ‘shoot-out’ to determine who wins a $US200K fully supported drive in the 2018 Cooper Tires USF2000 Championship Powered by Mazda.
“It’s pretty exciting so we will give it our best shot,” commented Lawson. “There’s lots of preparation to do before then so we will be working pretty hard over the winter.”