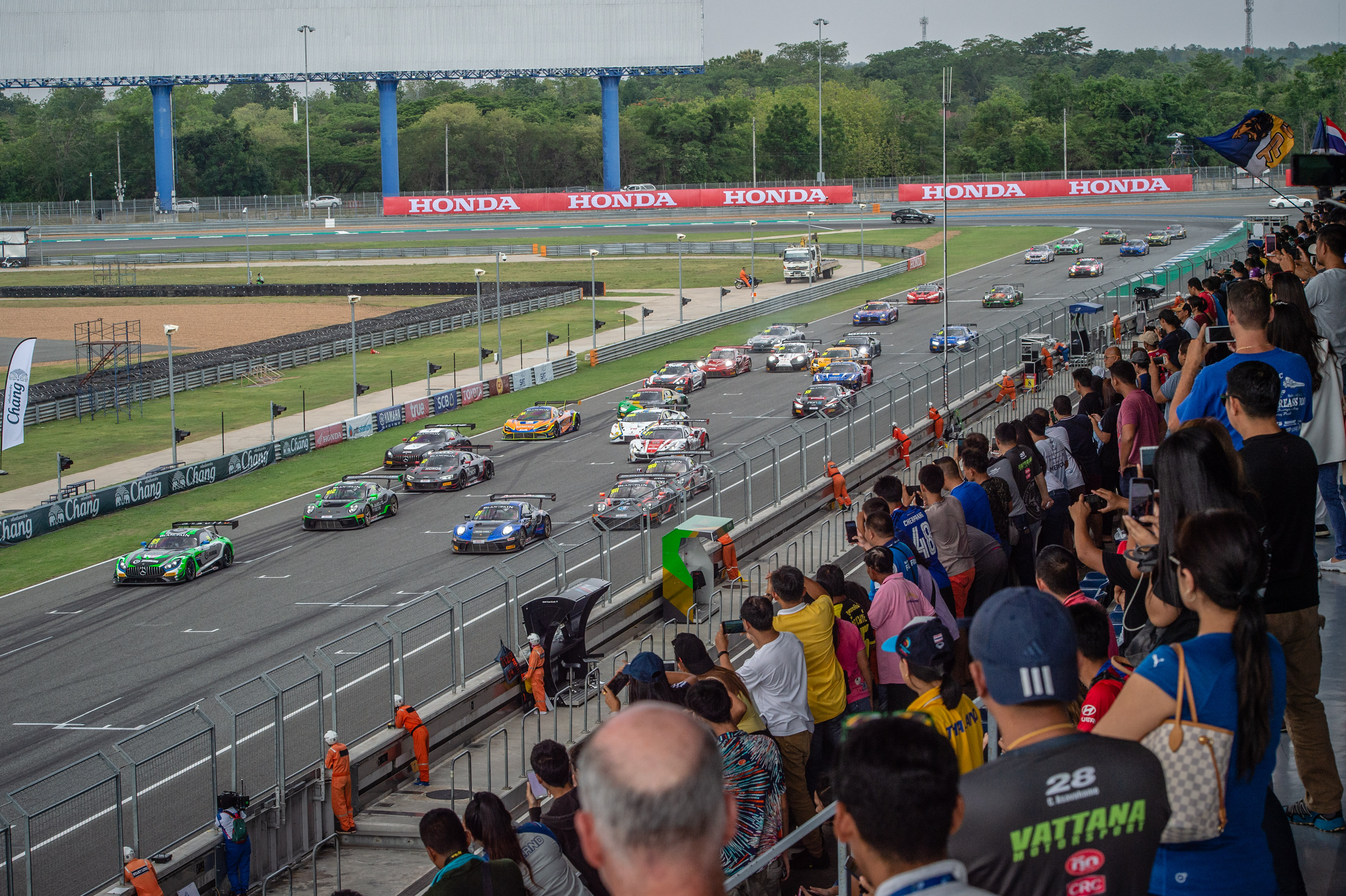 Indigo have a reputation for racing better than they qualify. Indeed, only one of the Korean team’s five podiums in the last six races was achieved from a top-three starting position. And they were at it again this afternoon when Choi hustled his way from seventh to second during the opening stint.

However, there was nothing he could do about Sathienthirakul who initially jumped from fourth to second before passing pole-sitter Darryl O’Young at Turn 3 on the opening lap. The gap initially remained fairly small but had opened up to six seconds by the time the Thai driver made way for Hamprecht after 30 minutes.

The duo’s 15s Pitstop Success Penalty for winning at Sepang ensured the German re-joined eight seconds behind Metzger after Choi pitted later in the 10-minute window. The gap ebbed and flowed thereafter as both encountered traffic at different points but ultimately remained almost unchanged by the time Metzger – who missed Sepang through injury – maintained his 100% podium record after also twice finishing on the rostrum at Ningbo last season.

Behind, Hamprecht saw off Rump who spent much of the second stint trying to lap Alexandre Imperatori after the Panther/AAS Motorsport Porsche was delayed early on. The Estonian, whose co-driver Tan pitted from seventh, finally elbowed his way past with less than 10 minutes remaining, by which time HubAuto Corsa’s Andre Heimgartner had made it a three-way podium scrap.

The grandstand finish never quite materialised, though, largely thanks to Hamprecht remaining just out of arm’s reach. His and Sathienthirakul’s second place sees them drop behind Choi at the top of the standings, albeit with the caveat of having a five-second shorter Pitstop Success Penalty tomorrow.

Absolute’s other Porsche driven by Jono Lester and Yuan Bo finished 10s behind the Heimgartner/Sakamoto Ferrari after the latter lost two places at the start, while VSR’s Alex Au and Frederik Schandorff completed the top-six following TSRT’s late retirement.

The Lamborghini crew also scooped Pro/Am honours ahead of T2 Motorsports’ David Tjiptobiantoro and Rio Haryanto, who finished seventh overall after starting 14th. JRM’s Li Chao and Chris van der Drift made an even better recovery from 17th to complete the top-eight.

Many of those performances partly came at the expense of both front row starters. Craft-Bamboo’s O’Young and Christina Nielsen were handed a stop/go penalty for a short pitstop, while Philip Descombes and Francis Tjia’s OpenRoad Racing Porsche faded to ninth.

Further back, Vattana Motorsport made use of their local knowledge to win the Am Cup class. Chonsawat Asavahame and Akihiro Asai came home eight seconds ahead of AMAC Motorsport’s Ben Porter and Andrew Macpherson who took second from B-Quik’s Daniel Bilski and Henk Kiks on the final lap.

GT4: YU AND MERLIN ROLL BACK THE YEARS

It had been a long time coming. 14 races in fact. But Craft-Bamboo’s Frank Yu and Jean-Marc Merlin finally followed up their Zhejiang victory in October 2017 with another in Buriram this afternoon by denying BMW Team Studie a third-straight win.

Yu started third, dropped to fourth and worked his way back up to second behind Takayuki Kinoshita by the time the pit window opened after 25 minutes.

The BMW and Mercedes-AMG’s 15 and 10-seocnd Success Penalties initially allowed GTO Racing with TTR’s Tony Fong to lead after the stops. However, he was quickly reeled in and passed by Merlin, who had emerged ahead of Sunako Jukuchou.

The Japanese driver also relieved Fong of second soon after but couldn’t match Merlin’s pace over the closing stages. 2.6s separated them at the finish.

Fong and TTR co-driver Brian Lee rounded out the podium, while tomorrow’s pole-sitting iRace.Win Mercedes-AMG shared by Ringo Chong and Setiawan Santoso was restricted to fourth after picking up a penalty.