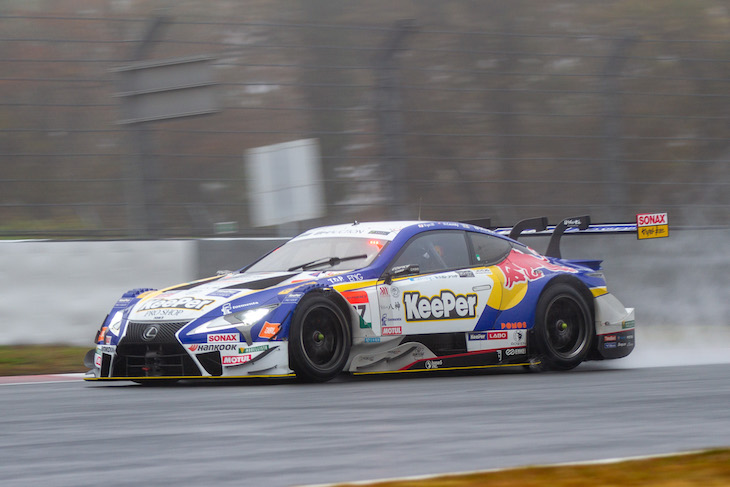 After two days of testing and practice in very mixed conditions – with clear and sunny skies on Thursday giving way to torrential rain and fog on Friday – the time had come for the first qualifying session to set Saturday afternoon’s grid for the first round of the Super GT x DTM Dream Race at Fuji Speedway.

The rain continued into Saturday morning, but the precipitation had stopped well in advance of qualifying at 9:25 AM local time, on a cold, damp track with patches of rain still left on the surface of the 4.5 kilometer circuit.

One driver who was especially motivated to put on a great showing was the GT500 Championship runner-up, Nick Cassidy, who stuck the #37 KeePer TOM’s Lexus LC500 on pole position with a mega lap of 1’41.827 set on his first flying lap, five minutes into the session.

Cassidy was one of the five GT500 drivers from Super GT who made the trek to the Hockenheimring for the DTM’s finale, but his race ended early via a collision with the concrete barrier. But after a difficult first attempt on the DTM’s Hankook tyres, this time the Kiwi was able to put it together and hold on for pole position.

“I had a bit of confidence – we’ve been quite strong this week,” said Cassidy after qualifying.
“Hockenheim didn’t go to plan, so this race…in the end, it’s a bit of fun for us – but after Hockenheim I wanted to show a good performance. So, I’m really happy!”

The 2017 GT500 Drivers’ Champion Cassidy will start alongside another previous GT500 Champion – the 2010 title winner, Loïc Duval, in his #28 BMC Airfilter Audi RS5 DTM, qualifying second and best of the European manufacturers’ fleets. He along with the other four Audis had consistently run well through both days of testing – and not all down to Duval’s past experience at Fuji through his time racing in Japan’s top flights.

“We’ve been okay all week long,” said Duval, “even though I prefer to drive in the dry conditions! It was tricky because the track was still drying, but we were still competitive. Especially with our first set of tyres – it was impossible to improve on our second set, but it was enough.”

Three drivers who had better luck on their second qualifying runs were 2018 GT500 Champion, Naoki Yamamoto (#1 Raybrig Honda NSX-GT), who jumped up to third with his final flying lap, and received a firm handshake and embrace from his rival Cassidy on his way back to the garage. Also qualifying in the top five were four-time GT500 Champion Ronnie Quintarelli (#23 Motul Autech NISMO GT-R) in 4th, and Mike Rockenfeller (#99 Akrapovi­ç RS5 DTM) in 5th.

Seven GT500 Drivers’ Championships, two overall victories at the 24 Hours of Le Mans, and a DTM Championship are represented in these top five starting, and four different manufacturers will be represented on the front two rows.

The best of a struggling BMW fleet was the #00 BMW Team RBM M4 DTM of Kamui Kobayashi, well down in 18th.

One of the big stories of Friday free practice was Hideki Mutoh’s high-speed wipeout out of 300R Corner on the flat-out approach to Dunlop Corner, his car spinning off in the rain and smashing against the barriers, destroying the rear of the car.

His Team Mugen mechanics were able to repair the #16 Motul Mugen NSX-GT, but Mutoh was only able to qualify 21st out of 22 cars – and he’ll start the race from the back after a five-place grid penalty for a change of monocoque, right next to four-time Paralympic gold medal winner Alex Zanardi (#4 ZF M4 DTM).

The race is available to watch live and free via the new DTM Grid streaming site as well as on-demand – registration is free during this testing phase for the service – but it must be stressed that the service is still subject to geographical restrictions and blackouts depending on your area!