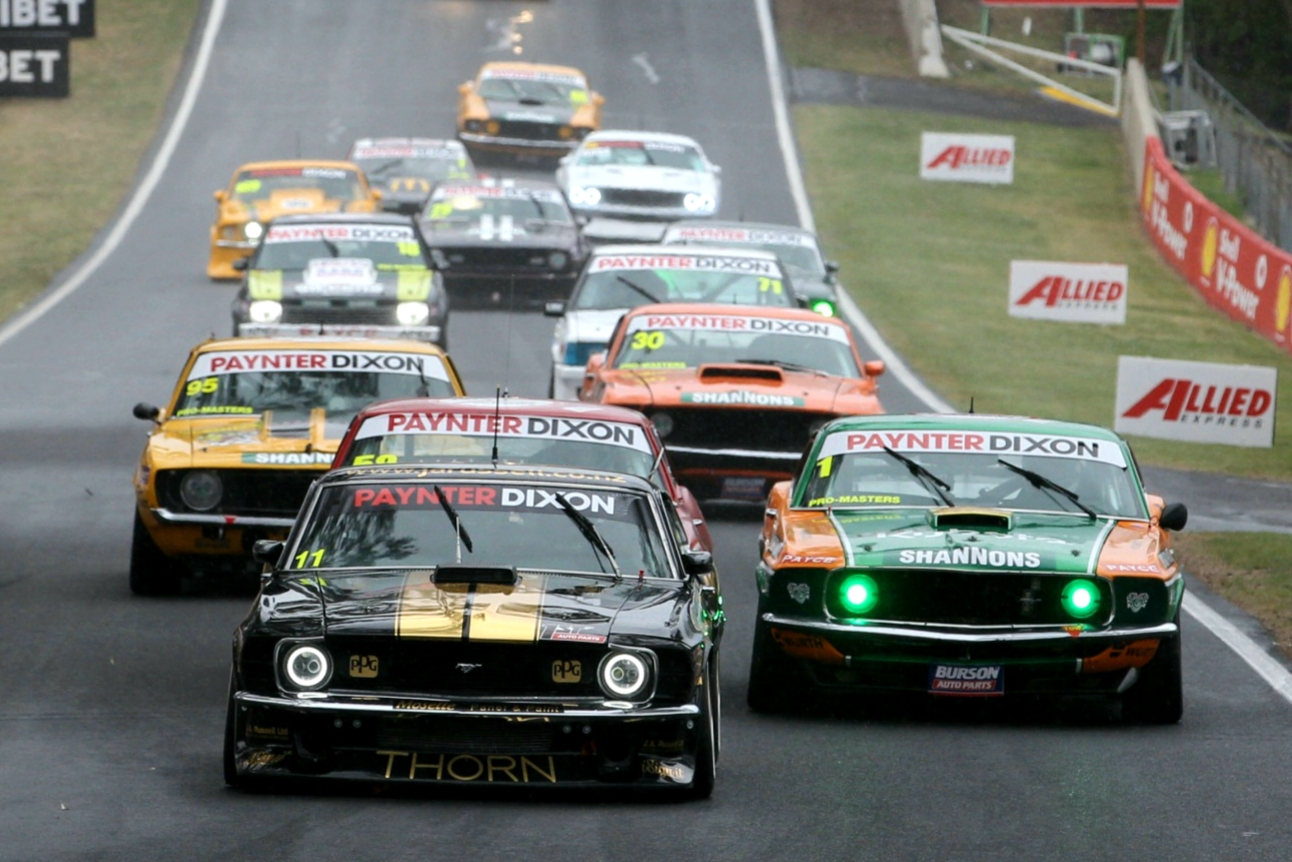 Kiwi race driver Angus Fogg secured an emotional and hard-fought win from Australian Steven Johnson in wet conditions at Bathurst in the second of three races for the Touring Car Masters (TCM) class on Friday 11 October.

Fogg dedicated the win to the late Kiwi race star Jason Richards, with whom he last raced at Bathurst in 2001. “I’m a bit emotional to be honest as the last time I was here was with Team Kiwi and Jason 18 years ago. It was raining then, and the memories have come flooding back, some heartache and lots of good times as well. That race is dedicated to Jason’s memory.”

Fogg is part of a large contingent of New Zealanders invited to race in the TCM support category at this year’s Supercheap Auto Bathurst 1000.

“Not bad for a veteran, is it?” said Fogg after winning the second of three six-lap TCM races. On Thursday, he piloted the J. A. Russell Ltd Mustang – a car he built himself to contest New Zealand’s Central Muscle Cars series – into the third-quickest practice time, then qualified third fastest behind Johnson and Aaron Seton, both in Mustangs. He then finished very strongly in second place in the first race and secured a new lap record for the category of two minutes, 16.2291 seconds.

This result put Fogg second on the grid beside Johnson for race two.

“Initially we were undecided what tyre to use as it was quite dry down the bottom while there was lightning and heavy rain at the top – quite a Bathurst thing, isn’t it?

“We decided to start on wets. From P2 beside Steven Johnson, we managed to get a reasonable jump, held the outside line around turn one and just took off. I took it easy over the top obviously in the first and every lap. The car was magic. I think our Hankook tyres were probably than the Hoosiers used by Australian category for these conditions, but also running wets is a great leveller in many ways. There was a bit of a seesaw with Steven as we came through some traffic, but I managed to hold the gap, keeping it on the black stuff and driving at nine-tenths rather than eleven-tenths to the flag!”

The weather conditions for the Friday afternoon race were consistent in their inconsistency with wet, cold drizzle at the top of Mount Panorama and dry through the bottom section. “With wet tyres on, you’ve got to drive very smoothly, and try to find the wetter lines down the bottom or they’d become overheated.”

Fogg was delighted to get a win for the Kiwi team. “I’m lucky to be one of those chosen to participate and even better, I get to start Saturday’s six-lap race from P1.”

Then, on Sunday morning, the Aussie and Kiwi cars will line up on each side of the grid in the second Trans-Tasman showdown. The fastest car in qualifying will determine pole, with the remainder of his ‘nations’ cars lining up behind – so if it’s Aaron Seton P1 in qualifying, TCM cars will start on the left side of the grid and the Kiwis on the right. The trans-Tasman winner will be the nation who accrues the most points between their first 15 cars home.