Pagenaud letter perfect in Toronto win; shaded all the way by Dixon 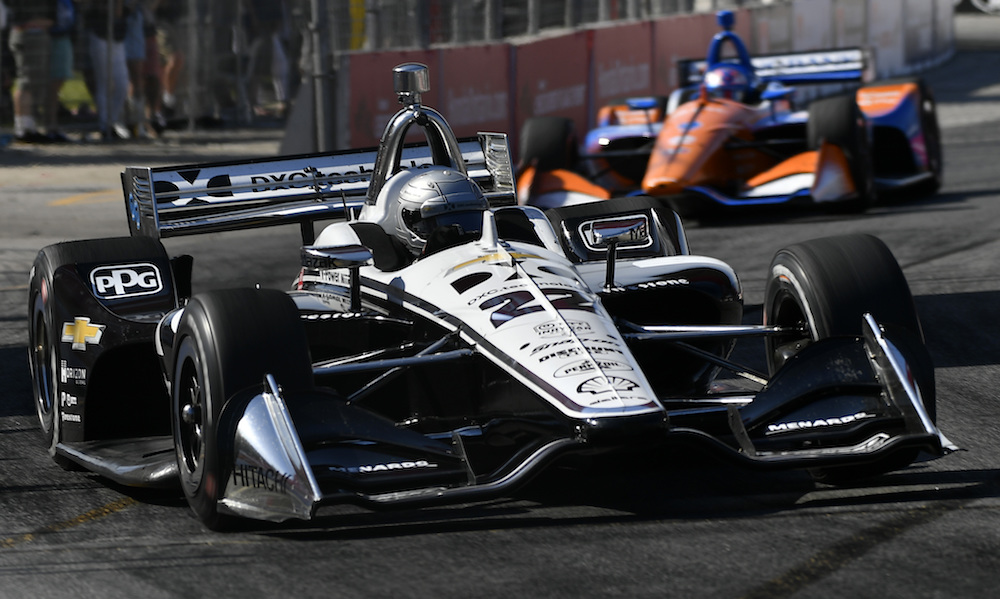 The final margin of 0.1373s might suggest otherwise, but the Honda Indy Toronto was all about Simon Pagenaud. The Frenchman, who had started from the pole and looked to be in a different league much of the weekend with his DXC Technology Team Penske Chevrolet, held onto that advantage at the start and pulled away at a fairly steady clip. Despite being leashed a little bit in the closing laps by fuel mileage concerns that enabled Scott Dixon and Alexander Rossi to close down his comfortable lead, Pagenaud was never seriously challenged en route to his third win of the season, and 14th of his IndyCar career.

Pagenaud was in a different league all weekend. Image courtesy IndyCar

“The car was plenty fast all day; we never really got in trouble with anyone,” related Pagenaud, whose win gave fresh momentum to a championship challenge that had flagged a little since his spectacular month of May at Indianapolis.

As if the tennis-elbow issues with his right arm weren’t enough of a handicap, Dixon’s comeback charge had to overcome an early wall-banging incident that put him on the defensive.

“We had lots of toe-in, I think. In some corners it wasn’t too bad, but in others it was really loose on turn-in,” related the series champion, who also made up some useful ground in points. “Once we got onto the blacks (tires) our car was really good — I was able to close in on Simon. But it’s so hard to pass here. I felt like we weren’t able to get close enough to get a good run on the straights. I think had we got past him, we would have set sail.”

Dixon admitted his best chance might have come at the start. “I had a pretty good run on Simon — he ran wide, and I was gonna keep on the throttle, but he started to close the door and the wall was coming up so I was lucky to hold off the other two behind us.”

Andretti Autosport’s Alexander Rossi drew satisfaction at having accomplished his primary mission of beating Josef Newgarden, the only man ahead of him in the points table, to the final podium place and reducing his deficit the championship leader to just four points.

“We knew going into today that we didn’t really have a race-winning car and it was going to take a bit of luck to get that,” he said. “So to finish ahead of Josef and get a trophy is a good day.”

Newgarden, too, was counting his blessings after a day that included another clout with the Turn 11 wall that had bitten his Team Penske entry in qualifying. Still, he had plenty of time in hand to lead home Felix Rosenqvist and James Hinchcliffe.

“If I didn’t make the mistake that I did in qualifying, it would have been easier, Newgarden mused. “When it goes green like that, pretty much where you start is where you’re gonna finish. You can make some of it up in the pit stops, but we just didn’t have enough today to overhaul Rossi and Dixon. And that was really my goal today. Pagenaud, if he got a clean start he was gonna be tough to beat.”

And so he was. Pagenaud grabbed the early advantage ahead of Dixon, while Rossi locked his tires briefly into Turn 1 but managed to slot in third ahead of Felix Rosenqvist. By Turn 8, though, the race was neutralized as Graham Rahal looked to the inside of Marco Andretti but Will Power was already making a move on him. Their resulting collision also collected Andretti, Matheus Leist, Marcus Ericsson and Ryan Hunter-Reay. All were able to continue, but with hefty delays.

“Not the way I should be driving,” a bemused Power admitted later on watching a replay.

Pagenaud made a clean restart on Lap 4 and quickly gapped Dixon and Rossi, while Jones pulled off a nice pass on Rosenqvist into Turn 3 to take fourth.

The leaders made their first stops starting on Lap 15, with most switching from red to blacks, while a handful of drivers starting on blacks (including Zach Veach and Santino Ferrucci) separated the front-runners. Pagenaud initially seemed happy to stay behind Veach, before sweeping past on Lap 23 after being advised from crew chief Kyle Moyer that his brake temperatures were rising.

By the time the regular order was restored, Pagenaud was more than 4s up on Dixon, and he steadily added to that, despite admitting on the radio that “I’m just cruising, really.”

After the second round of pit stops, however, Dixon cut Pagenaud’s 7s cushion to less than a second as the Penske driver worked to save fuel. Rossi, too, crept back toward the leaders, but Pagenaud never faced a serious threat.

Any chance of last-second drama at the front ended when Power finished his dismal weekend buried in the tire barrier with two laps to run. That meant the race ended under yellow, but the outcome had never really seemed in doubt.

“I was confident all weekend — I never had a doubt,” admitted Pagenaud. “Man, those days are the best — there are a lot of bad days in racing but these sweet days, man, they make up for it!”

Of the rest,  Ed Carpenter Racing’s Ed Jones had a frustrating fade to 12th after his promising Fast 6 qualifying run, having to cut his pace to save fuel. Rahal Letterman Lanigan’s Takuma Sato was unlucky to drop out with a blown engine after running fifth into the closing stages, while Harding Steinbrenner Racing’s Colton Herta made good on his post-qualifying pledge that a poor start (16th) wouldn’t spoil his race as he made steady gains through the field to finish seventh. Both Rahal and Andretti rebounded from their first-lap setbacks to finish ninth and 10th respectively.

There’s no rest for the NTT IndyCar Series contenders, who are back to work next weekend on the Iowa Speedway bullring.

Pagenaud letter perfect in Toronto win; shaded all the way by Dixon

Dixon on the lap that got away…or did it?